Another fold of the treefrog

This is probably the last in the series of posts based around the frog and its base. See earlier posts: here, here, and here. 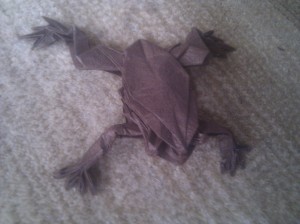 Here’s another version I’ve folded of the treefrog from Lang’s Origami Design Secrets. I used the deluxe washi available on http://www.origami-shop.com.

Now I really love this deluxe washi (although it’s probably not really appropriate for ultra-complex box-pleated folds) and I’ve said elsewhere that it’s like folding chocolate. There’s a few other models I’ve done with it and I’m sure I will get around to posting some of them up… eventually. (Those of you who follow my twitter feed might have seen a couple of them.)

This frog is probably the model I’m most proud of (with the possible exception of the Bull Moose from the same book). At some point I might try a wet-fold version from tant paper, but (like everything on this blog) don’t hold your breath!

This entry was posted in frog, Origami. Bookmark the permalink.